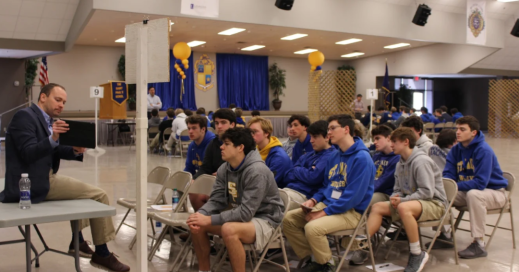 (COVINGTON, La.) Every year, St Paul’s alumni of various professions come to the Briggs Assembly Center to talk to juniors, giving them insight on different career choices. This year’s Career Day was held in the BAC on Jan. 24, 2018, and was attended by the entire junior class.

The day started off with students going to their first period class. Then, they met at the Briggs Assembly Center, where they separated into nine groups, each going to a separate speaker.

Each speaker provided their own advice for pursuing specific careers, and education that could help students in fulfilling their future plans.  The experience gave students a personal point-of-view concerning different careers.

“I feel that learning about these professions straight from the people who actually work in them is much more valuable than reading about them online and in pamphlets,” junior Hyde Healy said. 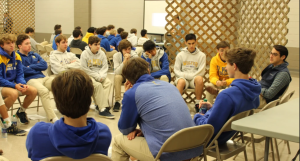 Religion teacher Jeff Ramon explains his calling and how he became a teacher. (Photo: Mimi Monteiro)

Fellow junior Ross Hightower has always wanted to be a neurosurgeon, but Career Day gave him new interests on his career choices.

“Every since I could remember, I wanted to be a doctor because I’ve always wanted to help people,” Hightower said. “At the lectures, I started to realize dentistry is also a great career idea. The dentist in attendance (Joel Burvant) talked specifically to students hoping on going into the medical field. He explained that dentistry is still considered a part of the medical field, but less stressful without being on call, not working as much, and spending more time with friends and family.”

Furthermore, Career Day not only helped students think about what career field they wanted to work in, but also what sort of life they wanted to live.

“The experience did more than just make me think about what I want to do, but also what I want in my life,” Hightower said. “The alumni talked about their living situations, traveling and such things. It was really an eye-opener for me and what I want in life.”

Lunch from Lola Restaurant was provided to the alumni volunteers by Keith Frentz ’96.

Following lunch, the juniors attended a presentation by Len Apcar, the Endowed Chair of Media Literacy for LSU’s Manship School of Mass Communications. The award-winning 40-year veteran of the New York Times and Wall Street Journal talked to students about how to identify fake news, as well as career options available with a degree in Mass Communications.

Daniel Wieseneck is a junior member of the cross country team, Lasallian Youth Leaders, the ditch digging club, and The Fine Cheeses Symposium. He enjoys all types of music and watches Netflix alone on Saturdays. You can reach him at daniel.wieseneck.2019@stpauls.com View all posts by Daniel Wieseneck →