(COVINGTON, La.) In years past, St. Paul’s seniors who were academically eligible were given the opportunity to enroll in a free period. The creation of this elective was intended to give burdened seniors a break so that they may catch up on school work and college applications, while also introducing them to the free time that they would be confronted with in the coming four years.

This year, however, free period has been replaced with the Apprenticeship Program after seniors began to request time to leave the campus and intern.

“What we learned from (free period) is that a handful of seniors each year came and said so I have this free time, can I go off campus and do this,” Principal Trevor Watkins said. “And we began to think about it, and thought, why not? That’s a good use of that time. They were making very productive use of the time elsewhere, and so it morphed away from the so called ‘free period’ towards an apprenticeship.” 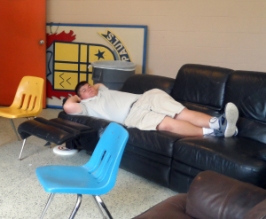 Alex Gandolfi ’14 rests on a couch in the old senior lounge during his free period. (Photo: Adam Cannon)

According to school administration, though the free period was created to take a load off of encumbered seniors, the elective came to be abused by some. Instead of making use of the time to catch up on college essays or study for a physics test, a number of students chose to wander around campus or play hacky sack.

This year, seniors who wished to intern at a local business had the opportunity to organize their schedules so that both of their electives were back to back, thus opening up three hours for them to travel and work during the school day. Students who take part in the program are expected to stay on track academically, follow the St. Paul’s disciplinary code while at the host site, provide their own transportation, and carry themselves in a professional manner.

Senior Beren Perry (far right) has taken on an apprenticeship at the Animal Health Clinic in Covington. (Photo: Karen Hebert)

Senior Beren Perry has taken on an internship at the Animal Health Clinic in downtown Covington, where he completes various tasks to assist a veterinary technician.

“The vet tech will give me any number of things to do,” Perry said. “I can pull up vaccines, go do a yearly check-in and interact with patients, or I can pull up the charts and surgeries and record the animal’s vitals.”

Though many seniors opt to pursue an internship that mirrors a career they have long envisioned themselves fulfilling, Perry elected to go out of his comfort zone.

“I haven’t really become more interested in the veterinary career,” Perry said. “Rather, I have learned that I don’t want to do anything involving veterinary medicine for sure. However, it was very interesting, and I am very happy that I got the experience.”

In the program’s first year, seniors have laid a notable foundation for future classes, working in several different fields and practices.

“We’ve got maybe 15 guys,” Watkins said, “and I would say that the apprenticeships that they are doing are fairly significant. We have a couple of students that go into surgery at the local hospital, one works with a vet, one works in physical therapy, one is in an architect’s office. They are learning things that they could never pick up in a classroom.”

Watkins feels that the internships are good both in the sense that students may fall in love with a career or find out that they have no interest in it whatsoever.

In the future, Watkins hopes to see the program evolve so that students are also using it to serve the community.

Students are not prohibited from earning a compensation for their apprenticeships, but they will not receive any academic or service credit from the school.

Students interested in qualifying for the apprenticeship program should inquire in the Guidance Counseling Center.

About The Paper Wolf

Articles and photos posted under the The Paper Wolf profile were generated by the editorial staff of The Paper Wolf or by the school's Public Relations office under the direction of Director of Communications Aaron Falkenstein. View all posts by The Paper Wolf →