You are here: Home » Magic in the Air: Walmsley’s Hat Trick Sends SPS to Third Round of LHSAA Playoffs

Conner scoring on his second goal and penalty kick of the game. (Photo – Jordan Eberts)

(COVINGTON, La.) — The St. Paul’s Soccer Team has shined once again in the bright lights of Hunter Stadium. The soccer Wolves fought hard and defeated the Mandeville Skippers 4-0 in the second round of the 2019 LHSAA State Championship Playoffs. The soccer Wolves are making a dominant run this year, living up to the stellar soccer reputation Saint Paul’s boasts, as the wolves are currently ranked first in the division, state, and nation.

Philip Pearce attempts to score with a header in the first half of regulation. (Photo – Jordan Eberts).

The Wolves came out of halftime with their cleats on fire. The Skippers defense fell through and the Wolves took numerous shots at the goal. Walmsley scored another goal from a penalty kick and another goal from twenty yards out, completing his hat trick. Junior Midfielder Jake Till added a goal from twenty five yards out. The Skippers were not able to keep up with the intensity the Wolves showed. There was not a single break in the Wolves defense in the second half and eventually, Coach Sean Moser decided Roberts was done for the night and put in sophomore Goalkeeper Hunter Kergosien. The Wolves put some of their reserves in the game and let the clock drip down to where there was no time left, securing the victory. 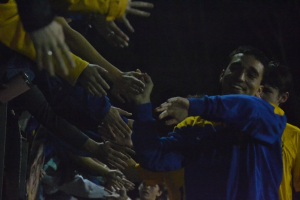 Player of the Game 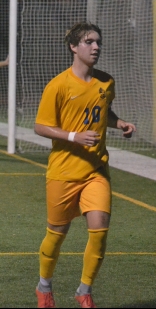 The player of the game is undisputedly senior Conner Walmsley. Walmsley had a memorable night as he begins to wrap up his SPS soccer career under the lights of Hunter Stadium. Conner really sparked this team out of their first-half slump and energized the wolves with three goals.

“Conner really tore it up, we bounced off his energy in the second half and played well as a team,” Priola said of his teammate.

“It felt amazing completing a hat trick tonight, especially against Mandeville. It was great beating one of our rivals in a playoff game, especially after what happened two years ago. It just feels great,” Walmsley said.

The Wolves will take on the Catholic High Bears on Tuesday, February 12th at Hunter Stadium to advance to the semi-finals round of the 2019 LHSAA Division I State Championship Playoffs.

Jordan is a senior at St. Paul’s. He is a first year writer/photographer for the Paper Wolf. Jordan has been a member of the St. Paul's football team since his freshman year. Wearing the number 38, he has transferred from a perfect linebacker position to the smallest nose guard in LHSAA history. He is one of the biggest music nerds on campus, second to Coach Dickens. He is also the biggest Saints, Pelicans, and the LSU fan at St. Paul’s. You can contact him at jordan.eberts.2019@stpauls.com. View all posts by Jordan Eberts →

One Comment on “Magic in the Air: Walmsley’s Hat Trick Sends SPS to Third Round of LHSAA Playoffs”