You are here: Home » SPS Repeat as Challenge Night Champions 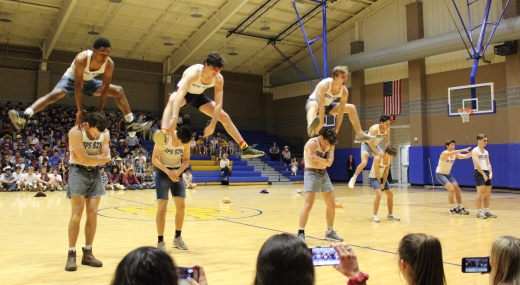 The St. Paul’s Dance Team was the highlight of the night. (Photo- Mimi Monteiro)

(COVINGTON, La) — On April 8, many people might have been watching the NCAA Championship, but at St. Paul’s the students battled it out at Challenge Night with sister school SSA. St. Paul’s students entered “The Gene” (Gene Bennet Sports Complex) wearing cowboy attire, and St. Scholastica came as Little Red Riding Hood. The energy level inside the gym was tangible. The girls and the boys sat across from each other and chanted throughout the night as the competitions raged on. 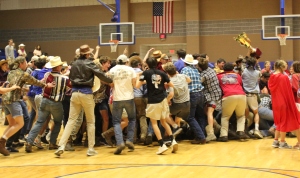 The first game played was volleyball, and the boys from St. Paul’s won the first two games to complete a sweep of the girls. Next, the girls munched their way to victory by eating Oreos faster than the boys. After the Oreo challenge, the boys ended up hopping on the backs of their teammates faster than the girls did in Birdie on the Perch. Following that, junior Raleigh Martin beat a senior from SSA in a quick game of ping pong. When the balls stopped bouncing, the dancing started. The boys started off the madness and the girls ended it. (Click here to see the video of the senior boys dancing.)

When the dancing had ended, the SPS team beat the girls, once again, in an unorthodox game of musical chairs. The announcer would say a random item and the students would have to grab it from the crowd and return to their seats before all of the spots were taken. During the last event, the boys were up two over the girls. The girls ended up beating the boys in the uniform dash and sent it to overtime.

The overtime was decided by bottle flipping. Jonathan Bertucci ended up defeating a senior from SSA. He flipped the bottle before she did, and when the bottle landed the boys rushed to the middle of the court and cheered. The SPS group was at midcourt and paraded around the trophy.  This was the second year in a row that St. Paul’s defeated St. Scholastica in the coveted Challenge Night.

One Comment on “SPS Repeat as Challenge Night Champions”