(COVINGTON, La.) — Homecoming week is an annual tradition celebrated by thousands of high schools across the country, and was celebrated last week at St. Paul’s School. One of the traditional events of Homecoming Week is the selection of girls to the Homecoming Court. Many are nominated, but only one is selected to be the […] 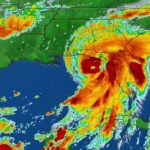 (COVINGTON, La.) — The 2016 Atlantic Hurricane season, which technically began on June 1, 2016, started earlier this year with Hurricane Alex in January; however, as its peak approaches, the season looks to be relatively normal in size. “The official forecast for this season from NOAA was 10-16 named storms, 4-8 hurricanes, and 1-4 major […]

(COVINGTON, La.) — Saturday, May 14, 2016, saw the commencement exercises of the St. Paul’s School Class of 2016 carried out in the Briggs Assembly Center on campus. The class is the school’s 105th graduating class and sets itself apart in excellence based on its achievements. Members of the Class of 2016 have been accepted into […]

(COVINGTON, La.) — St. Paul’s sports this school year has set a new bar, concluding the year with all teams winning district championships, three state championships, many top five finishes in state, 12 college signings, and several broken records, as well as top five national rankings in two sports. “The main goal for all of […]

Seniors, it’s not too late to leave your bequests! Email either your bequests along with your name, college, and major (or revisions to a current bequest) to thepaperwolf@stpauls.com. .    .    . I, Luke Avenel, bequeath my knowledge of all things random to Alex Oliveri. I also bequeath my shadow and my ability to get by […]

(COVINGTON, L.a.) — Preparations for the annual summer leadership trip to California have begun for the members of the Lasallian Youth Leaders. The trip, hosted on the campus of St. Mary’s College in Moraga, Calif., brings together the Lasallian district of San Francisco-New Orleans  for a week of leadership and faith-based training. Long considered a […]

Every New Year, 45% of Americans make a “New Year’s Resolution.” Almost 50% of the time, the resolution involves self-improvement or education related development. Other commonly used resolutions include weight watching, saving money and relationship related resolutions. On average, 75% of New Year’s resolutions are maintained only through the first week; 44% last over six […]

(COVINGTON, La.) — With the gubernatorial races in a runoff vote, it seems the appropriate time to analyze governor Bobby Jindal’s performance. According to a recent Gambit poll, only 27% of Louisianans approve of Jindal’s tenure as governor. According to informal canvassing, that number appears to be even lower at St. Paul’s School. “If I had […]