You are here: Home » Teachers Dedicate Time on Faculty Retreat

(COVINGTON, La.)  — The faculty of St. Paul’s School partook in a Faculty Retreat Day on Feb. 24, for which the members of the SPS staff were split up into groups that went to serve the community in different ways. 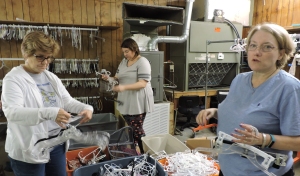 Pam Cullen, Julie Beck and Susan Jordan help to put clothes on hangers to be hung up in the Habitat ReStore. (Photo from Mimi Monteiro)

Habitat for Humanity, Keep Covington Beautiful, Northshore Food Bank, and Rebuilding New Orleans were some of the organizations that benefited from the volunteers. These organizations are dedicated to helping the community, so it is no surprise that many of the faculty requested this this type of work for their annual retreat.

Campus Minister Jeff Ramon, who helped organize the retreat, said, “The faculty could get together, work on something, have a goal, and accomplish that goal together, all the while helping the community.”

Members of the math department apply a coat of paint to a newly built house. (Photo by Mimi Monteiro)

Those who worked with Habitat for Humanity spent their time in two groups. One group spent time building and painting a new house that will eventually go toward sheltering a needy family, while the other group traveled to the Habitat ReStore, which takes donated building materials and sells them at a low price to benefit the poor. At the ReStore, volunteers helped sort through donations and stock the shelves.

Vic Morlas and Mick Nunez clean up trash on the side of the road. (Photo by Mimi Monteiro)

Keep Covington Beautiful is a group that does its best to pick up all of the litter and trash that has been left behind on the roads of Covington. They also strongly advocate recycling and preserving nature. After all of the work is done, this sort of community service makes a big difference and truly does keep the city beautiful. Faculty members who volunteered for this organization worked on roadside and park cleanup.

A group of teachers makes repairs to a tornado-damaged neighborhood in New Orleans East. (Photo by Mimi Monteiro)

Not only were the faculty of St. Paul’s able to help a great deal of people, but according to Principal Trevor Watkins, who served during the retreat day, it was also a productive team-building experience that formed a greater sense of camaraderie between the members of the faculty.

A group of faculty members prepare to work on a house for Habitat for Humanity.
(Photo courtesy Mimi Monteiro)