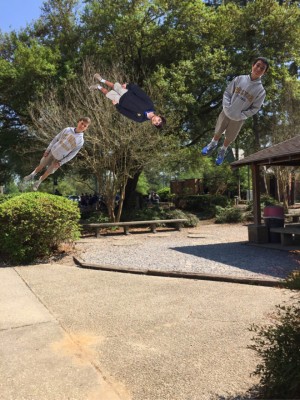 (COVINGTON, La.) — Three St. Paul’s eighth graders have reportedly been blown away after a light breeze rolled through campus Thursday (March 23). Witnesses say the boys were lifted off the ground and whisked away “like pieces of paper” by the gust of wind.

“It was pretty crazy,” said bystander Peter Kershaw, a junior at St. Paul’s, noting that while the situation was unfortunate, it was “pretty awesome” to witness. “I felt a slight breeze, and the next thing I knew three eighth graders were fifteen feet in the air.”

The eighth graders, identified as Craig Tellworth, Lucas Hill and Ian Holt, were reportedly eating lunch when the sudden breeze took them into the air, blowing them northward until they were no longer visible. In an effort to not be taken away, Hill reportedly grabbed onto a tree branch, but quickly lost his grip and continued his involuntary flight.

This tree in the center of campus acted as a temporary anchor for Lucas Hill before the wind eventually whisked him away with his two classmates. (photo: Hyde Healy)

By the time authorities were alerted, the boys were nowhere to be seen. Around an hour later, the St. Tammany Parish Sheriff Department issued a statewide search for the young men.

“The wind still hasn’t died down, so locating them will not be easy,” a top law enforcement official said. “If we don’t find them within a few hours, based on the direction of the wind, they could be anywhere from Mississippi to Indiana.”

Parents of the young students are reportedly also very concerned.

“I don’t know how this could have happened,” said Amy Holt, Ian Holt’s mother. “I thought I was cautious enough. Every day I packed three large bricks into Ian’s backpack, ya know, to prevent something like this from happening.”

Other parents seem to take similar precautions with their sons.

“Every morning, I tie a 100-pound kettle ball to my son’s ankle,” said Bob Waters, father of a an eighth grader who was not affected by the wind. “It may be a little inconvenient for him, but at least he’s on the ground.”

At press time, one of the eighth graders, Craig Tellworth, had been found “disoriented and confused” in a pine tree in Paducah, Kentucky, while the search for the other boys continues.

One Comment on “CRY WOLF: Three Eighth Graders Blown Away after Light Breeze Rolls Through Campus”