You are here: Home » Raiders Franchise to Move for Third Time, Moving to Las Vegas in 2019 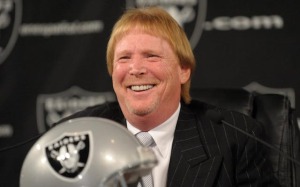 Raiders Owner Mark Davis is the man who pushed for the move to Las Vegas. (Photo Credit: Kirby Lee/Image of Sport-USA TODAY Sports)

(OAKLAND, Calif.) — The NFL has had more than its fair share of teams relocating and moving to different cities recently. The Rams moved to Los Angeles before last season, and the Chargers moved from San Diego to Los Angeles in January. Now, the Oakland Raiders are making the third move in the franchise’s history, this time out of the state of California and to Las Vegas, Nevada. This decision has split the fan-base in two. Some are absolutely devastated that the team is waiting two years to move, and some are still going to cheer for their Raiders no matter what.

This move does not affect the way the Raiders will play, as they are obviously contenders with the recent acquisition of future Hall of Fame running back Marshawn “Beast Mode” Lynch. He will bring a whole new dimension to the Raiders’ offense. Khalil Mack leads the defensive effort, along with former Super Bowl MVP, Malcolm Smith. Quarterback Derek Carr is the centerpiece to the offense in Oakland, and wide receiver Amari Cooper is one of the best young receivers in the NFL.

Many fans were up in arms about this move, calling owner Mark Davis greedy, among other things. Davis said in a statement to the fan-base, “The Raiders were born in Oakland, and Oakland will always be part of our DNA. We know that some fans will be disappointed and even angry, but we hope that they do not direct that frustration to the players, coaches and staff.”

Davis continued on to say, “We plan to play at the Coliseum in 2017 and 2018, and hope to stay there as the Oakland Raiders until the new stadium opens. We would love nothing more than to bring a championship back to the Bay Area.”

I feel the pain for the Raider’s fanbase, as it is almost as if your girlfriend says she will break up with you in two years, but she is gonna stay with you while she waits. This move is very dumb, as living in Las Vegas — the casino capital of the world, where game odds are calculated each week — will cause lots of problems for the NFL and its disciplinary rules.