You are here: Home » OPINION: Eradicate the Two-Party System, Vote Your Values

“However (political parties) may now and then answer popular ends, they are likely in the course of time and things, to become potent engines, by which cunning, ambitious, and unprincipled men will be enabled to subvert the power of the people and to usurp for themselves the reins of government, destroying afterwards the very engines which have lifted them to unjust dominion.”

The quote above was articulated by our first president, George Washington, in his farewell address, published by the American Daily Advertiser in 1796. Washington wrote this address after setting one of his many governmental precedents by declining a third term to the presidency, even though the majority of the public pushed for it. The excerpt itself emphasizes the detrimental nature of political factions in an organized government, which he observed from the demise of other countries. At the time, the Democratic-Republican party had been founded by Thomas Jefferson and James Madison in apparent opposition to the Federalist party. Sure enough, the two parties grew and evolved, and in not too long, the United States’ leaders were elected in a two-party system. Moreover, in our short history we have managed to disregard every warning laid out in Washington’s farewell address. 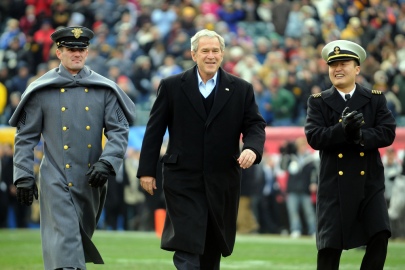 President Bush is walked out onto a football field before the Army-Navy football game in 2008. (Photo: Flickr Creative Commons)

Fast forward to the presidential election of 2000. George W. Bush is running for president as a “compassionate conservative,” while Al Gore counters him on the Democratic ticket. This election, which was eventually conceded by Gore after a Supreme Court ruling asserted that Florida’s voting system did not comply with the Equal-Protection Clause, highlighted just how polarized our country had become politically. It became clear that the two parties had drifted away from one another substantially, and partisanship amongst legislators became a sort of prerequisite to being elected. Inevitably, this led to a lack of compromise in congress, which then translated to volatile elections that shifted drastically to the right or left. Red, or blue. Today, we are experiencing the prime of political divisions. There is, however, a relatively new occurrence.

When the country split down the middle in 2000, the Republican and Democratic parties distanced themselves from one another, but with the approval of their bases. Today, it seems that the two parties are becoming more and more unattached from their respective electorates.

Republicans, on one hand, are dividing, with one group moving more towards the center and the other staying anchored to their original ideals. This has been blatantly demonstrated in the current Republican-majority congress that can’t seem to get any legislation passed. Take healthcare reform as an example. From January of 2011 to March of 2014, Republicans in congress voted 54 times to simply repeal the Affordable Care Act (ACA), according to The Washington Post, knowing that either the senate or the president would dismiss or veto it. Now, with a republican majority in all three branches of government, the party has failed to even come close to repealing the core of the ACA, all because the mantra went from “repeal” to “repeal and replace.” The thing is, true conservatives are vehemently opposed to government-sponsored healthcare on any level, yet a myriad of Republicans, led by President Trump, aim to replace the existing ACA with a similar structure. Ergo, we are left with a Republican proposed “repeal and replace” bill being held up not by Democrats, but by a few Republicans sticking to their original values. The result is a constituency, enraged at the stalemate, that is becoming increasingly disconnected from the leaders elected to represent them.

On the other hand, the Democratic party has taken a leap to the left. During the 2016 presidential election, thousands took to the streets to embolden their candidate in taking an extreme stance on mainly social issues. This led the Democrats to undergo a facelift, and the institution is now characterized by overtly progressive stances on just about every issue. If one were to scroll through the news feed of any social networking site or browse the CNN website, they would probably think this strategy is working quite well. However, this strategy met defeat in the special election earlier this year in Georgia in which Jon Ossoff, a progressive Democrat, was beaten by Karel Handel, a Republican, in what was the most expensive U.S. House race in history. Subsequently, it became clear that the Democrats are basing their strategy on a vocal, youthful electorate, while most of its voters just aren’t ready for such drastic steps to the left.

In addition to all of this, the younger generations in the U.S. are showing more signs that they don’t explicitly identify with either party, Republicans especially. In correlation with the decline in devout religious activity, many young people who believe in the fiscal tenets of conservatism care less about the strict social policies. The most prominent of these issues is gay marriage, which is widely accepted amongst young voters, regardless of party identification. What many youths don’t understand is that there are third parties that represent just those beliefs. Our two-party system has become so cemented that voting for a third party candidate is seen as “a wasted vote,” or “a vote for the other guy.” To me, those phrases are not just enraging, but destructive to our democracy. The paramount democratic right we posses as Americans is the ability to vote for a candidate who we believe will represent us the most effectively and with the most integrity. Why should we be coerced into casting a ballot for a candidate that represents just a few of our values simply because they have the best chance of winning?

Furthermore, it is up to the emerging generations to rid ourselves of these bloated divisions that our founding fathers would have been repulsed by. It is up to us to make the change, and all it takes is a little courage at the ballot box to cast a vote for somebody who you believe will stand up for all of your values, regardless of their party. It is up to us to redefine our broken, corrupt and outdated party system.

Comments are welcome via the comment box below. Readers may also submit a Letter to the Editor to ThePaperWolf@stpauls.com.