You are here: Home » [satire] CRY WOLF: Teacher Trying to Actually Teach During Last Period on a Friday Clearly Delusional

(COVINGTON, La.) A teacher who was actually trying to teach her class during the last period of school on a Friday is clearly delusional, according to multiple concerned sources. Students say Janice Bell, a Geometry teacher, has “definitely gone off the deep end” after she attempted to run a productive class an hour and a half before the weekend began last Friday (March 23).

“We have some work to do,” Bell, who people suspect may be clinically insane for thinking it was possible to get even the slightest amount of work done during her class period, said. “Please quiet down guys.”

According to reports, Bell’s students initially thought she was playing some kind of practical joke on them. 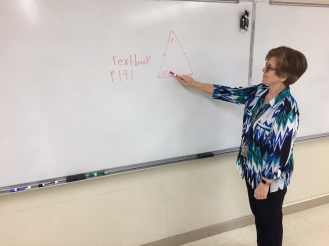 Mrs. Janice Bell, who many suspect has become mentally unhinged, attempts to teach her class about triangles when she is perfectly aware it is the last period on a Friday. (photo credit: Luc Hebert)

“Mrs. B’s done some wacky stuff before, but this takes the cake,” Freshman Nicholas Bronson, who never even bothered to unpack his bag, said. “She had me going there for a second, making me think we were actually going to have to learn stuff. During the last class on a Friday! Imagine that!”

However, after twenty minutes of listening to Bell insist the class “settle down and listen,” students began to get worried.

“I’m actually pretty concerned. She’s never done anything so irrational like this before,” Freshman Tyrone Bridges, who spent the majority of the class playing Fortnite on his iPad, said. “Should we call someone?”

After word of the incident involving Bell spread around St. Paul’s campus, the school administration has intervened. School officials say Bell has been placed on temporary leave while her mental state is evaluated.

“This is a delicate situation,” Assistant Principal Joe Dickens said. “Mrs. Bell is a great teacher. But how on Earth she thought she could get her students to do any amount of work is beyond me. Doesn’t she know they all mentally clock out around lunch on Friday anyway?”

“It’s odd. She passed all of our psychological evaluation tests with flying colors,” Dr. Sarah Rivers, head psychiatrist at the Covington Behavioral Health Hospital, said. “But since she truly believed she could make her students do stuff when the weekend was so close, there is obviously something very very wrong.”

When reached for comment, Bell provided further evidence for her insanity by saying that just because it’s a Friday and it’s last period that does not give students an excuse to mess around the entire time.

One Comment on “[satire] CRY WOLF: Teacher Trying to Actually Teach During Last Period on a Friday Clearly Delusional”