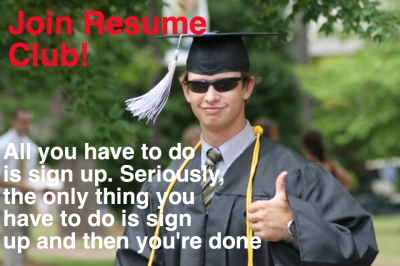 (COVINGTON, La.)  An ambitious St. Paul’s School student has reportedly started a “Resume Club.” Sources say the club’s sole purpose will be to pad the resumes of its members.

“So many students get involved in things just so they can put it on their resume,” Resume Club founder Peter Ross, a senior who realized he spent the first few years of his high school career doing nothing and is now panicking as college applications loom ahead, said. “So I thought, why not cut out the middle man? Have a club that only exists to boost the resumes its members.”

The club’s only membership requirement is signing your name, according to multiple sources. Additionally, the club is structured to look the absolute best that it can on a member’s resume.

“Everyone is President,” said Ross. “Literally, as soon as you sign up you become President.” 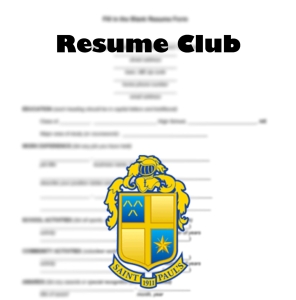 The Resume Club’s official logo, which appears, like most aspects of the Resume Club, as if it took no effort whatsoever to make. (Photo by Hyde Healy)

The club already has over 2,000 members, which is impressive considering that it has only existed for three days and St. Paul’s has a student body of around 900 students. Additionally, many members are reportedly ecstatic to be a part of the club.

“I love the Resume Club,” said club President Paul Tapper. “Putting in virtually zero time and effort and still getting to tell colleges you did something is what high school extracurriculars are all about.”

“The Resume Club is a way for people with common interests to connect,” said fellow club President Joseph Miller. “Those interests mainly being trying to do the bare minimum amount of work.”

Sources say the club has monthly voluntary meetings where the members stage photos of each other doing noteworthy things that would look impressive on a resume.

“Last month, some kid brought his cat,” Ross said, “and we took turns ‘rescuing’ it from a tree.”

The club reportedly hopes to one day expand its operations to include doing absolutely nothing on a national level.