(COVINGTON, La.) The Northshore Food Bank has reportedly foreclosed on a gingerbread house, according to sources. The food bank moved to foreclose on the 32-square-inch home yesterday (Dec. 20) after the gingerbread homeowners, Bob and Susan Gumdrop, failed to make four consecutive mortgage payments.

“We’ve given the homeowners plenty of time to come up with the dough,” said the bank’s chief lender, Tracy Buchanan, adding that the bank has been sweet to give the Gumdrops so many chances to bake their payments.

“We’re sorry it had to be this way, but sometimes this is just how the cookie crumbles,” Buchanan said.

According to Bob Gumdrop, he started missing payments after being fired from his job at Enterprise Rent-A-Car.

“I was the sole gingerbread winner of our household,” Gumdrop said. “So when I lost my job it was crushing.”

Gumdrop says it will be difficult for him to find work again soon.

“I don’t have a college degree,” Gumdrop said. “Going out in this job market? I’ll be eaten alive for sure.”

Regarding the future, Susan Gumdrop said she is scared and uncertain.

“We have two kids in private school and another in the oven,” Susan Gumdrop said, “What are we going to do?”

Food bank officials say the dilapidated condition of the home will make it a tough sell. 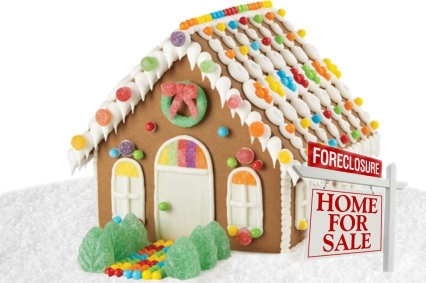 The food bank has given the Gumdrop family 30 days to vacate the tasty, candy-covered premises. (image credit Hyde Healy)

“I’m not gonna sugarcoat it. The house is in very crummy shape,” said home inspector Richard Doss. “The foundation’s crumbling, and there’s no AC, so the air inside is stale. And it has ants. So many ants.”

Doss added, however, that the house’s exterior decorating was “quite tasteful.”

The Gumdrop’s experience is not new. During the great gingerbread housing crisis of 2008, millions of gingerbread people lost their homes due to foreclosure. It was one of the most devastating and delicious economic crises in recent memory.