(COVINGTON, La.) — For the past four years of junior Ashton Van Deventer’s high school career, he has served his grade as class president, and, for his fifth and final year at St. Paul’s school, he is running for the coveted position of Student Body President.

“When I ran for class president in 8th grade, I really didn’t think I was going to win with the unprepared speech I gave,” Van Deventer said, “but now that I am a junior running for Student Body President, I feel that I have a real chance to help the school.”

If Ashton becomes Student Body President, his main objective is to include every student in the choices that go on around school, such as Challenge Night theme, Homecoming theme, and football game themes.

“The students right now do not have nearly enough input on what they participate in,” Van Deventer said. “I can and will change that.”

Throughout his enrollment at St. Paul’s, Van Deventer has involved himself in several school activities and sports. He participated on the football team for three years as a lineman, and has been on the baseball team all four years of high school, currently serving as a pitcher. In addition to this, Van Deventer has also elected to take honors and advanced placement classes including: AP U.S. History, AP Writing, AP Art History, Advanced Math H, and Chemistry H. 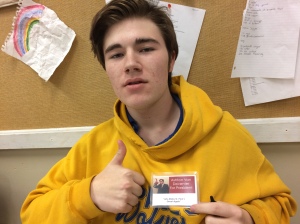 “Upon coming to St. Paul’s, my parents and I alike thought that the best way to optimize my time here would be to involve myself as much as I can and embark in a rigorous schedule,” Van Deventer said. “The past years have been tough, but I’ve learned the valuable lesson of developing a work ethic.”

If he takes the election, Van Deventer will be carrying on the legacy of his older brother, Leland Van Deventer, who served as Student Body President during the 2015-2016 school year.

“After watching my brother lead the Student Council, I’ve gained a very clear understanding of the process of the Student Council and how to get things done,” Ashton Van Deventer said. “I believe that this, along with my four years of experience as class president, qualifies me greatly to lead the student body.”

Van Deventer is running against Matthew Stalter for the position of Student Council President. The election will be held on Thursday, April 6, 2017.