(COVINGTON, La.) The four block, 90-minute class schedule St. Paul’s operates under has given students a very unique relationship with the clock.  A St. Paul’s student was reportedly devastated to realize there was still 50 minutes left of class yesterday (May 9). Sources say sophomore Tyrone Peters was horrified after looking at the clock and realizing there was almost an entire hour left in his F period Algebra II class.

“Are you serious? No. There’s no way,” Peters reportedly muttered to himself. “I feel like I’ve been in here forever, and there’s still that much time left?” 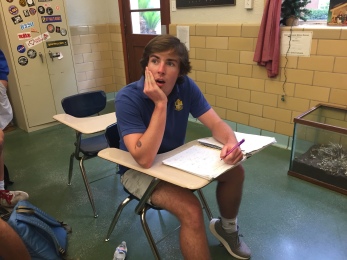 A visibly-shaken Peters stares at the clock in disbelief. (photo by Hyde Healy)

Students in the class say Peters was initially in denial about the time.

Peters then slammed his fists on his desk and repeated the words “It can’t be” several times, according to witnesses.

Sources say once Peters accepted the fact that he had to sit in class for another 3,000 seconds, “all of the life drained out of him.”

“He just kind of slumped back in his seat and stared at the floor,” Jackson Mansport, a student in the class, said. “He looked defeated, like a guy lost at sea who finally realized no one is coming to rescue him.”

Students say Peters then sank into a deep depression, responding to anyone who spoke to him with a soft, incomprehensible groaning noise.

“What was once a youthful and jubilant young boy was now a hollow shell of a man,” Mansport said.

Some students described their special relationship with the clock to reporters.

“Some days, I don’t even look at the clock,” freshman Corey Dell said. “Because I know it will just destroy me.”

“One thing I like to do is deliberately not look at the clock for a really long time,” junior Kris Walsworth said.  “And then when I finally look at it and see there’s only like ten minutes left of class the feeling is euphoric.”

Students say Peters grew even more depressed after realizing F period was only the second to last period of the day and not the last period, as he had previously thought.